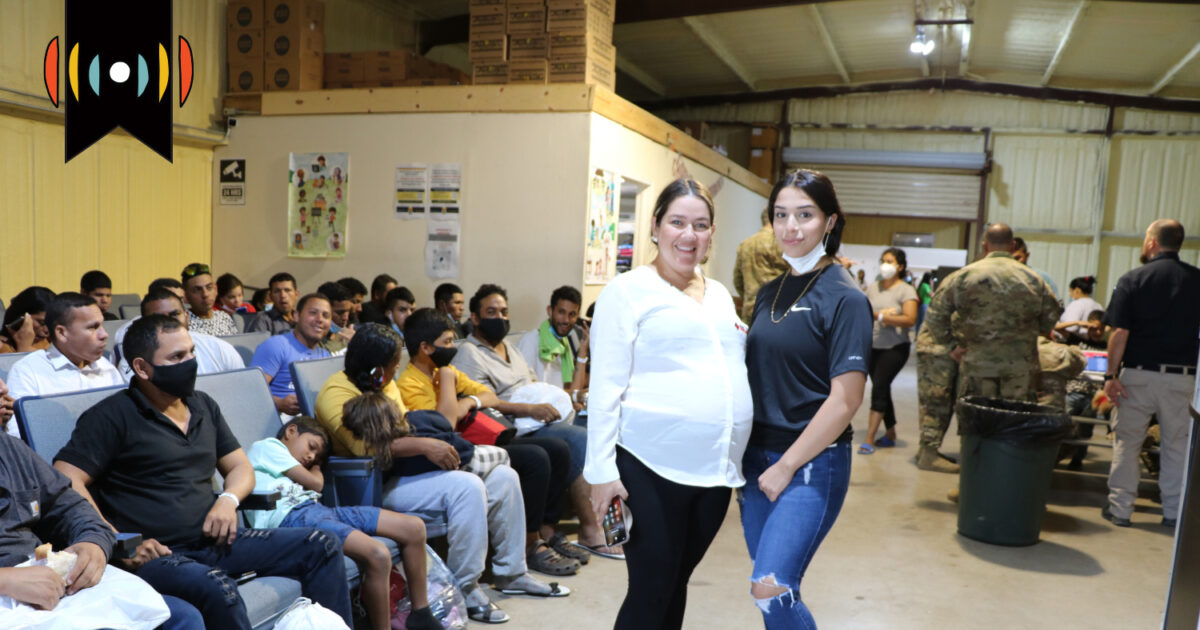 Glad you’re joining us for today’s edition of The world and everything in it. Good morning, I’m Paul Butler.

MYRNA BROWN, HOST: And I’m Myrna Brown. Up first The world and everything in it: protecting the vulnerable.

Last week you heard about the toll the illegal immigration crisis is taking on ranchers and law enforcement around Eagle Pass, Texas. The nearly half a million people who crossed the border there this year dwarfs the city’s 30,000 residents.

BUTLER: Today WORLD correspondent Bonnie Pritchett brings us her latest story on the human toll of illegal immigration – this time on the migrants and those who care for them.

WHEELER: There is no bus station here and Eagle Pass is just a stop. It’s twice a day…

That’s Valeria Wheeler, director of Mission Border Hope in Eagle Pass. She is small in stature and eight months pregnant, but maneuvers through the crowd with dexterity. Each day, Immigration and Customs Enforcement transports about 800 people to the mission from a Border Patrol processing facility. The mission helps migrants on their way north.

VALERIA WHEELER: And so when they arrive, they come here, they sit here and we have intake processors receiving them…

Within about 8 hours, most are on their way to other cities across the country.

Last fiscal year, U.S. immigration authorities arrested about 475,000 people illegally crossing the border into the Del Rio Sector, where Eagle Pass is. US authorities turned some away under a pandemic policy known as Title 42. But many of them were given the chance to seek asylum and released into the United States with an order to appear before an immigration court. Since April, Mission Border Hope has processed 70,000 of those asylum seekers from around the world. 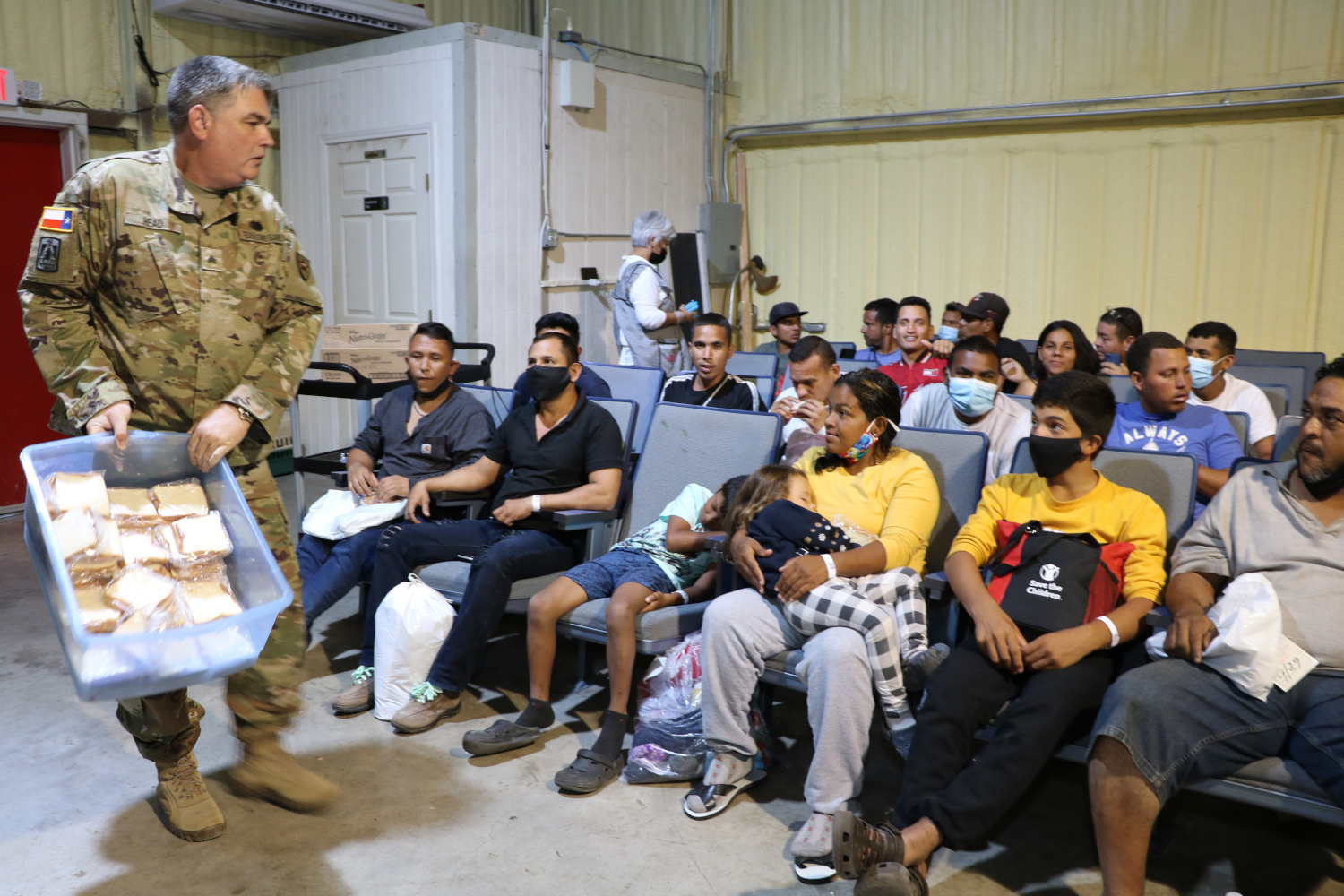 A Texas National Guardsman hands our sandwiches provided by the mission to immigrants waiting for the free bus ride to New York City. The trip is courtesy of the State of Texas
Photo by Bonnie Pritchett

The ministry used to help the 30,000 residents of Eagle Pass.

WHEELER: Well we are a 501c3, what we used to do is support the community, vulnerable populations like children, the elderly and families in poverty…

Then, in 2018, Border Patrol agents realized that scammers were targeting newly released immigrants with promises of help. They asked the ministry for help.

WHEELER: They need a lot of help in every way, you know, spiritually, psychologically, economically, they’ve been through a lot… We don’t provide economic support. We do not provide travel for them. We help them communicate with their families, help them make it easier for them, so they can continue their journey…

WHEELER: They’re here because they’ve been through a lot of fraud, a lot of price gouging, a lot of different dishonest things. So they charge them here for us, and if they need to get a refund or something, they should. And we guarantee that they will get the service…

Some bus rides are free thanks to the state of Texas. And there is a waiting list.

One of those buses goes to New York. Venezuelans Ronald Aguilera and Carlos Araujo will be on it.

WHEELER AND AGUILERA: (IN SPANISH)

Economic circumstances forced Aguilera and his wife to leave Venezuela for Colombia. His government job paid $8 a month — enough to buy two pounds of rice and two pounds of flour.

AGUILERA: He wants a better future for his family.

Araujo also came to the US via Colombia. He was in the Venezuelan army but left fearing President Nicolas Maduro’s persecution of his political rivals, including Araujo’s family.

WHEELER: He wants to work and he wants to earn money so that he can support his family, because he is a farmer… His mother always tried her best to feed them. And he has 11 siblings…

WHEELER: Something he wanted to share is that his mother passed away four days after he left. And he wasn’t able to go to her service or anything. So that was something that was really hard for him…

Aguilera looks older than his 41 years. He’s also 40 pounds thinner than when he started his two-month journey. He lost 12 of those pounds as he, Araujo, and their fellow travelers traversed the Darien Gap. It is a treacherous route through the mountainous rainforest between Columbia and Panama.

That 8-day trek haunts them. 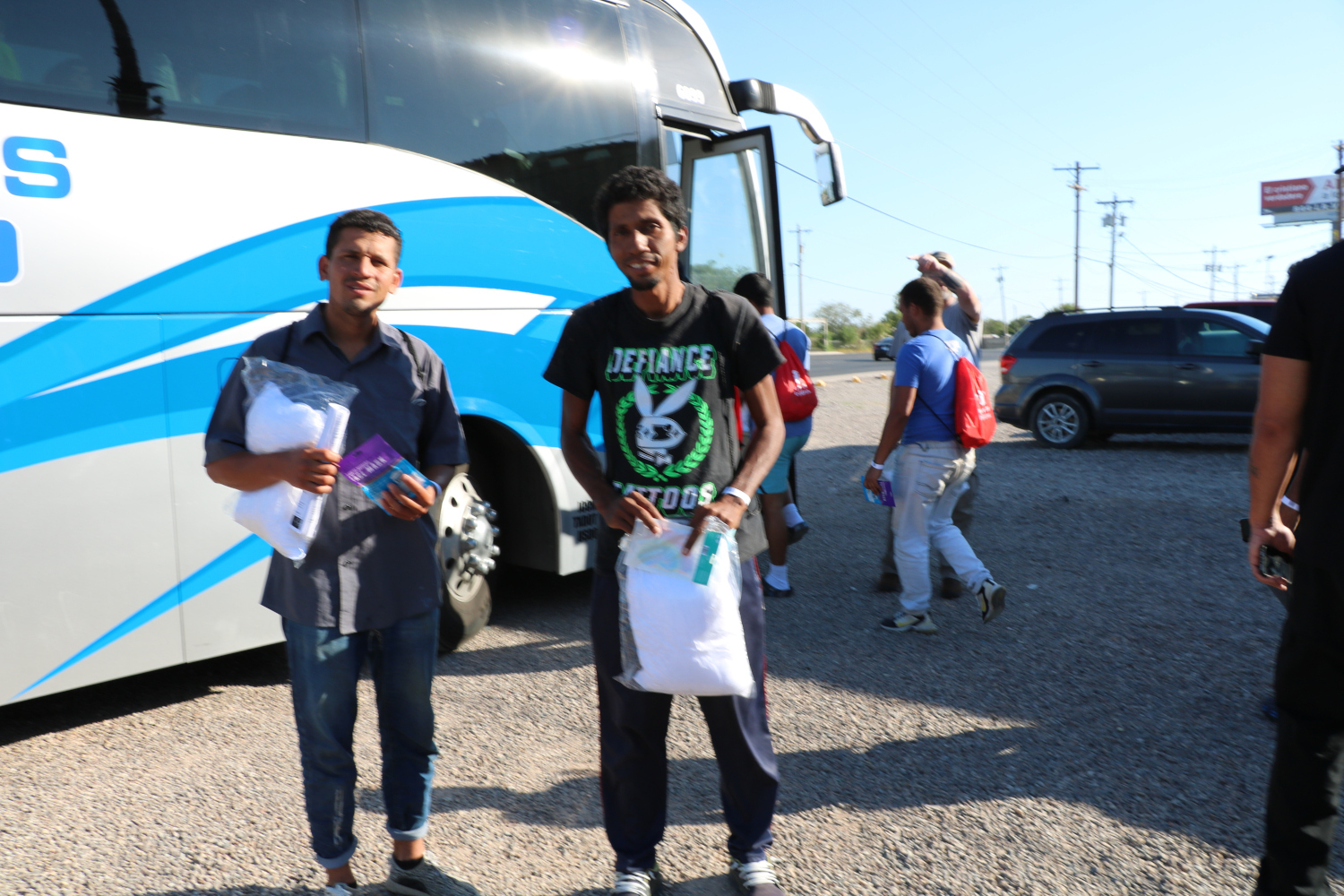 Carrying travel bags containing a pillow and small blanket, Carlos Araujo, left, and Ronald Aguilera prepare to board a bus that will take them to New York City.
Photo by Bonnie Pritchett

Ajauro describes what they saw.

WHEELER: It’s corpses on the left and corpses on the right… Because they just get too exhausted. The jungle is the river. They are animals. It’s the mountains that are so steep. The mud goes up to here…

Guides offered help – for a fee. Those who could not pay were left behind.

Migrants survived the jungle, but were at the mercy of armed bandits in Mexico and Guatemala. That grieves Wheeler.

WHEELER: I feel really bad because a common comment is that the worst part of their trip was in Mexico. And I’m Mexican! So I hate to hear that…

The day-to-day logistics of getting each person past Eagle Pass costs the ministry’s 14 employees and 10 volunteers. They convey the gospel message through a weekly worship service and pastoral guidance for those who request it. And, more fundamentally, by treating every immigrant with the dignity worthy of an image bearer of God.

Wheeler understands that Mission Border Hope is doing God’s work today. She is humbled to witness his provision for the task.

But she also longs to recover what was lost in the aftermath of the greater crisis.

WHEELER: So we want to help the community again. Because we’re standing still for a while. We are doing this, but Eagle Pass residents also need a lot of help.

WORLD Radio transcriptions are made on a rush deadline. This text may not be in its final form and may be updated or revised in the future. Accuracy and availability may vary. The authoritative record of WORLD Radio programming is the audio record.