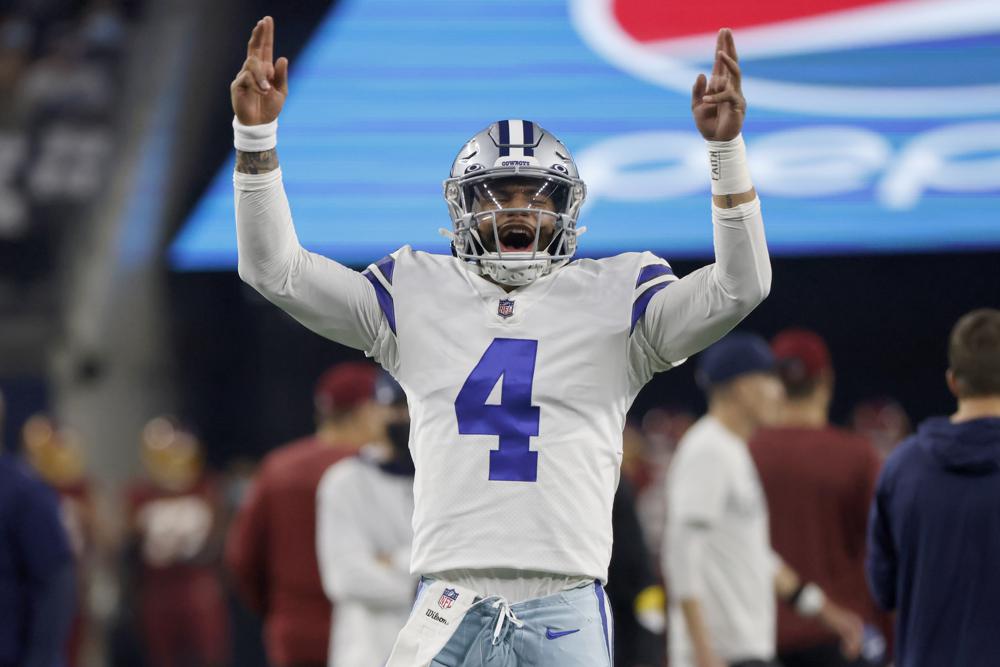 BILLS PLAYER TO WATCH: WR Stefon Diggs. The Browns held Diggs without a catch until he scored the deciding TD on a 5-yard reception with 14 seconds left in the first half. He finished with a season-high 48 yards on four catches. Diggs should be more active against one of the NFL’s weakest defenses.

LION PLAYER TO WATCH: RB Jamaal Williams. He had a career-high three touchdowns against the Giants. Williams joined Shaun Alexander, LaDainian Tomlinson and Priest Holmes as the only players since 2000 to have more than one rushing TD in at least five of a team’s first 10 games in a season. To upset the Bills, he will probably have to score at least twice.

Dak Prescott and the Dallas Cowboys turned the fury of one week’s meltdown into the biggest traffic brawl in club history the next week.

Now they think about building on all the things that went right while the adversary tries to figure out what went wrong.

Not much else compares for this pair of playoff contenders, the Cowboys are healthy and look ready to get going, the Giants are sputtering and dealing with injuries.

Dallas blew a 14-point lead going into the fourth quarter for the first time in franchise history in an overtime loss at Green Bay before delivering one of his most dominant performances in a long time in a 40-3 win at Minnesota .

Prescott finds a rhythm after missing five games with a broken thumb on his throwing hand, surrounded by a mostly healthy roster with plenty of playmakers on defense as well.

“I think coach (Mike) McCarthy said it best,” Prescott said. “Take a picture of what it felt like, what it looked like when we were at our best. And if you are not, remind yourself or do the things necessary to get back to that.”

The first regular season game Kevin O’Connell participated in during his volatile career as an NFL player came as a relief to New England in a rare lopsided loss in the late game.

The following week, the Patriots had a bye and sure enough, coach Bill Belichick had them poised for a win. Even after Tom Brady lost a year to a knee injury in the opener, the Patriots finished that 2008 season with an 11–5 record.

The response to the Week 3 blowout was methodical, not maniacal. The message was about controlling what they controlled and just letting go of the rest.

“That stays with me to this day, just as an example of what it’s like to coach in those times when adversity strikes and how to be your best for your team,” said O’Connell.

The Minnesota Vikings freshman coach found himself in the same predicament this week, following a 40-3 loss to Dallas. The Vikings (8-2) host the Patriots (6-4), still coached by Belichick all these years later, on Thursday night with just four days to regroup. Appropriately, O’Connell will experience one of the greatest tests of his mettle as boss against a coach who has significantly influenced his knowledge and perspective.