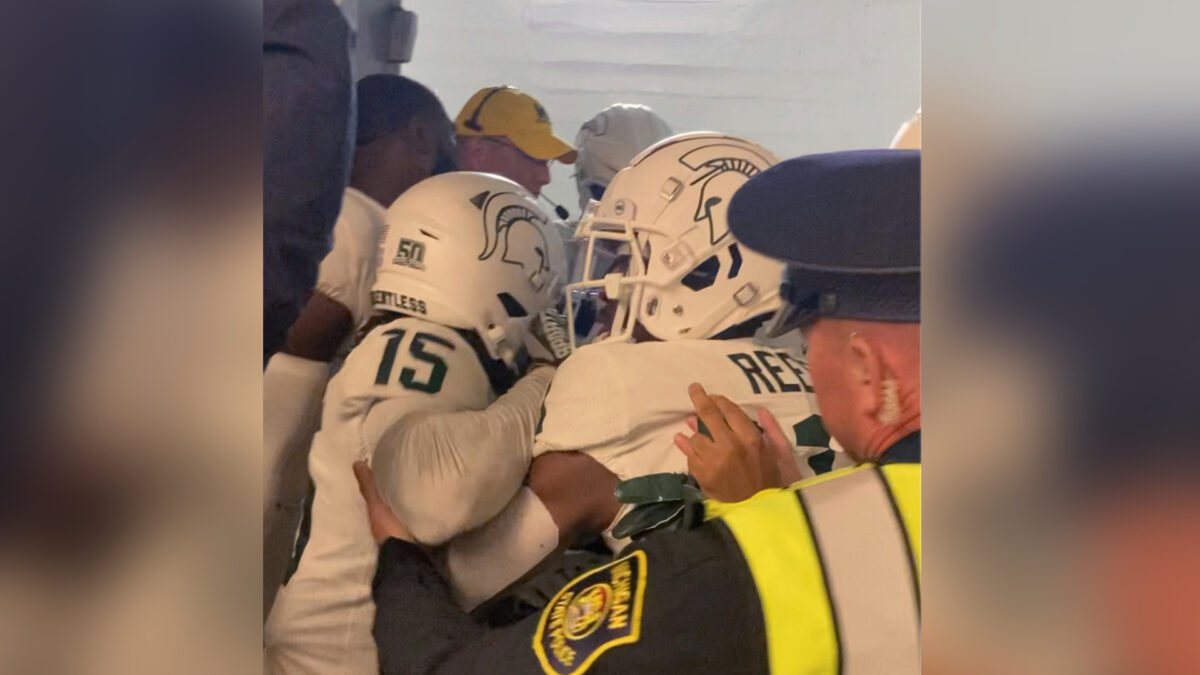 ANN ARBOR, Michigan — Seven Michigan state football players have been charged for their actions during the post-game fight in the Michigan Stadium tunnel last month, according to a statement Wednesday from the Washtenaw County district attorney’s office.

The most serious charge is against cornerback Khary Crump, who faces a misdemeanor charge. The charges against the six others are felonies. Linebacker Itayvion “Tank” Brown, safety Angelo Grose, cornerback Justin White, defensive end Brandon Wright and defensive end Zion Young are each charged with aggravated assault, and linebacker Jacoby Windmon faces one count of assault and battery.

No Michigan players face charges, which were announced prior to the teams’ final regular season games. No. No. 3 Michigan will play rival No. 2 Ohio State on Saturday with the Big Ten East Division title on the line. A few hours later, the Spartans close out the season at No. 11 Penn State and need a win to qualify for bowl.

On October 29, skirmishes broke out in the Michigan Stadium tunnel after the Wolverines defeated the Spartans 29–7. Social media posts showed Michigan State players shoving, punching and kicking Michigan State players Ja’Den McBurrows in and near a hallway that does not lead to either locker room. Brown, Grose, and Young are seen on video getting physical with McBurrows.

McBurrows and defensive back Gemon Green entered the tunnel and walked alongside the Spartans, after the game, as much of the Michigan team swung the Spartans off the field after beating their state rivals for the first time in three years .

Green, in another post, is surrounded by police as he yells down the tunnel at Michigan State players.

Crump appears to be waving his helmet at a Michigan player in one video. That could explain the more serious charge, which carries a maximum sentence of four years in prison. State law defines felonious assault as an assault “using a knife, iron bar, club, brass knuckles, or other dangerous weapon without intent to commit murder or cause great bodily harm.”

Michigan coach Jim Harbaugh has said one of the players, whom he did not identify, may have suffered a broken nose. He also said that Green was beaten by a Spartan player and that McBurrows was attacked when he tried to assist.

The statement from the prosecution did not detail the allegations, including who is accused of beating whom. It added that the office will not comment further as the case progresses. It was not clear when the accused players will first appear in court.

Michigan State’s athletic director and football coach did not immediately respond to requests for comment.

Michigan President Santa J. Ono said in a statement Wednesday that the school appreciated “the thoughtful, considered approach of the Washtenaw County prosecutor’s office on this unfortunate incident.”

“We also want to express our concern for all players involved, especially those who have been injured,” said Ono. “The University of Michigan will continue to cooperate fully with any additional assessments of this case.”

An attorney representing Green, Tom Mars, said after the charges were filed that he was “not at all surprised by the prosecution’s decision.”

Asked if his client could sue over the fight, Mars said that after talking with Green and his father, they agreed with his recommendation “not to take any action on the tunnel incident until the season is over.”

“I don’t want any of this to distract Michigan football and neither should Gemon,” said Mars.

Michigan State coach Mel Tucker has suspended eight players — including Malcolm Jones, who was not charged — for their role in the fight.

Following the October 29 incident, then Michigan State President Samuel Stanley publicly apologized for the “violent” skirmish. His departure had nothing to do with the brawl in Ann Arbor last month.

“I am extremely saddened by this incident and the unacceptable behavior of members of our football program,” Stanley said in a statement at the time. “On behalf of Michigan State University, my sincere apologies to the University of Michigan and the student-athletes who were injured.”

After the charges were announced Wednesday, Michigan interim president Teresa K. Woodruff issued a statement saying the school would “continue to evaluate this matter and cooperate with any investigative review.”

“While we do not condone the actions of some football players on October 29, we will support our student-athletes through this process,” she said. “MSU strongly believes in restorative justice practices and education about harmful actions.”

She added that universities should “make our respective environments safe places for competition.” She said she was committed to making “meaningful changes” to that end and would report by the end of the year. Woodruff didn’t elaborate on what those changes might be.

By Michael Tarm and Larry Lage