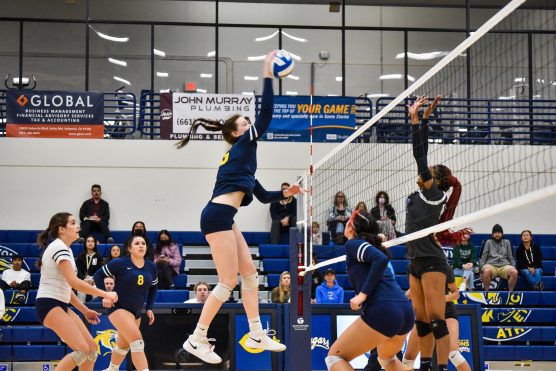 College of the Canyons sophomore Aly Grodell has been named a member of the American Volleyball Coaches Association All-American and All-State Teams, along with the Western State Conference South Division Player of the Year title to recognize the Cougars’ many accolades in the post season to emphasize .

COC sophomore Sabrina Sveiven was named WSC, South Libero of the Year, becoming the first in program history to do so. Canyons co-head coaches Lisa Hooper and Clay Timmons share the conference’s Coach of the Year award. In all, the Cougars had eight players earn All-WSC awards, including Grodell and Sveiven.

Her AVCA All-American Third-Team title makes Grodell the fourth in program history to earn that accolade, joining Bible (2015) and two-time winner Ferguson (2018 and 2019).

Grodell is also one of only six players from the region to earn All-State honors.

A full list of 2022 All-American and All-State honorees is here.

Grodell, who attended Valencia High School, finished the regular season with 211 kills in 77 sets for a rate of 2.74 kills per set. She also hit a team-high .402 for the season and placed third in the squad with 27 aces. Grodell’s 59 total blocks led the way for Canyons. She reached double-digit kill totals nine times, including a season-high 19 vs. Cypress College on Sept. 10.

Sveiven finished the regular season with 134 digs at a rate of 2.31 per set over 21 games. The Hart High School product also racked up 17 aces on the season with 23 assists.

The Coach of the Year award is the sixth in Hooper’s career (1999, 2000, 2013, 2014, 2015, 2022) and the first for Timmons. The award comes on the heels of the head coaching duo that led the Cougars to the seventh conference title in program history while going undefeated in conference play for the first time since 2015. The Cougars finished the regular season ranked No. 14 in the state according to the latest regular season rankings of the California Community College Women’s Volleyball Coaches Association.

COC sophomore outside hitter Brianna Botello and defense specialist/libero Abby Sherman were both named to the All-WSC Second-Team.

Botello turned in a second strong season for the Cougars with 185 kills, 74 digs, 17 total blocks and six aces while playing in 25 games. Sherman saw time in two positions, which translated into a team-high 179 diges and 37 aces.