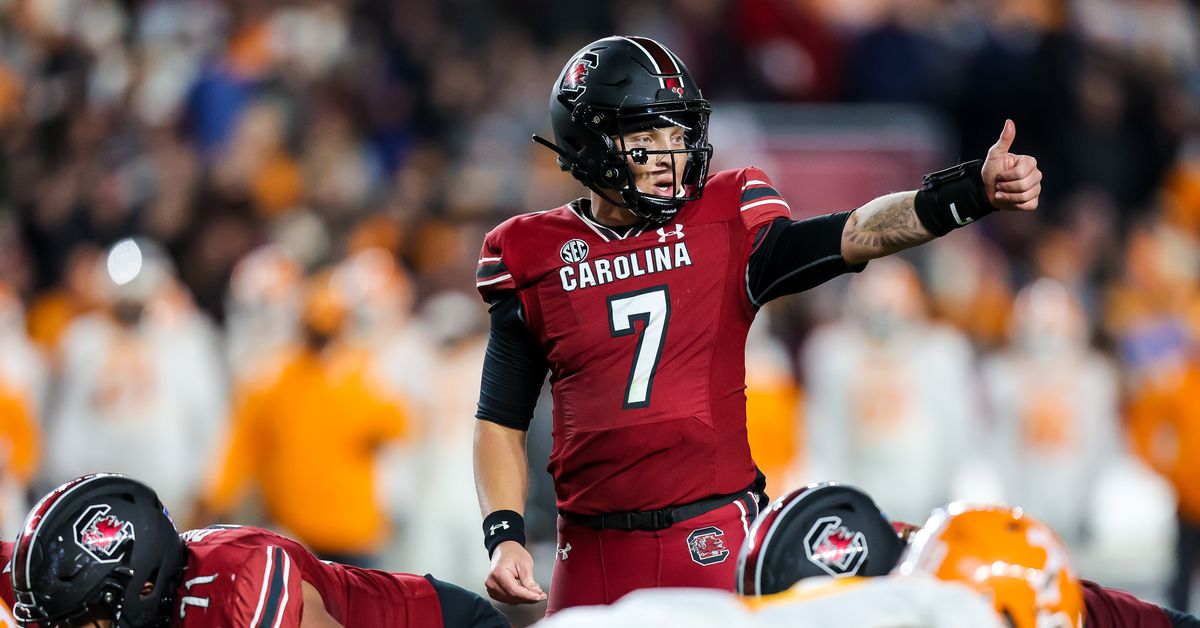 The Palmetto Bowl has been undisputed for eight years. Well, seven years plus ten games. Ever since Clemson threw the proverbial rooster off their backs behind an experienced defense and a young playmaking core in another late November afternoon game in Death Valley in 2014, a rift between Clemson and Columbia became an unbridgeable chasm; the Tigers blasted into a title-winning powerhouse with this core as the Gamecocks floundered in Steve Spurrier’s wake.

In the seven years since plus the first ten games of this season, no one’s expectations were really (read: rationally) different. Clemson bounced back modestly but effectively enough from a modest setback year in 2021, while the Gamecocks were at least a year away from battling the elite team or two on their schedule. South Carolina won cathartic games against Kentucky and Texas A&M – two teams that provide a real litmus test – but was largely not as good as their record at the time indicated. Sure, Missouri and Florida overran them and the results were back in line with expectations.

Then came the eleventh game.

What the hell happened in Columbia last weekend? An offense that wrapped up two weeks ago against Florida – who then promptly lost to VANDERBILT – exploded for 9 touchdowns at #5 out of nowhere.

Many have rightly questioned Tennessee’s defense this season, but Saturday’s result was more than a poor defense. Gamecock’s offense performed at a level not seen in years, so stunningly dominant that one match could be enough to save coordinator Marcus Satterfield’s job.

Before the Tennessee game, I expected to focus on the Gamecock defense and how to attack it so that Clemson could quickly get the 20 or so points needed to finish this game. I didn’t even want to talk about their offense because I honestly thought it would have been petty and patronizing, and I’d like to think I’ve outgrown most of the obnoxious traits I developed during middle and high school in Northeast Columbia (I will, of course, return to my childish form the day Clemson loses a Palmetto Bowl).

Although, post-Tennessee? It’s impossible to ignore what Spencer Rattler, Jaheim Bell and Atwane Wells have done to Tennessee seemingly without a sweat. We’ll discuss what worked, what will translate (and especially won’t) against an ultimately dominant Clemson defense, and most importantly, whether last weekend’s performance was a Real chance for South Carolina to get upset.

It’s hard to dive right into the Gamecocks’ offensive blast against Tennessee without first trying to sketch their identities and establish just how great their performance in Tennessee really was.

But there hasn’t really been an identity. In Rattler, they run an elite 7-on-7 camp QB with a great arm and quick release, but little of what I call pocket courage or patience to attack progressions in anything other than a clean pocket and two easy reads. He can be incredibly good when there’s no pressure, but once you get a hold of him, he remembers; his eyes drop and from there he checks down or throws unwise prayer balls.

Their best player in my opinion has been Marshawn Lloyd for a long time, but he’s been injured more often than not and Satterfield has relied more on the wildcat Dak Joyner and moved Bell tight to the backfield to try and do everything he could behind an attacking roll out line. no one moved.

So Satterfield has been all over the map, bouncing between airstrike, power run, RPO, wildcat, vertical passing, and zone-read drafts and formations, at seemingly random but completely predictable times. But what seemed desperation — Bell weighs over 230 pounds and is considered the only hope of making yards without Lloyd behind an objectively awful (2.38 line yards, 108th in the nation) run-blocking line — appeared just a week ago overnight genius Bell was an absolute menace on the ground and in the flats. With zero Tennessee pass rush to speak of, Rattler finally looked like the 5 star they were hoping for.

The turnaround between Florida and Tennessee defies belief even today. But looking back at the Florida game, I quickly remembered why so many of their fans want Satterfield out. They are very handicapped by offensive line, Lloyd’s injuries and Rattler’s slow development, but the first hint of disaster in Florida had nothing to do with it:

Satterfield called a PA counter with a deep post, probably my favorite deep shot against man marking. Since you’re tight running back so far, there’s nothing wrong with early deep shots and designed pocket moves in the game plan.

But the block schedule was off from the start, with a tight end responsible for the defensive end. The pulling guard has to go outside to help, but was caught inside waiting for an irrelevant green dog blitz. This is not on play-calling; it’s planning and Rattler panics.

A dig is the ideal cover 4 and cover 2 beater if the QB has enough time to hit it, and with the seam (or post against a single high safety) in it to pull back the safeties, an expected throw can easily go behind the linebackers. Now that Florida doesn’t put or get any pressure, Rattler can anticipate the easy reading without lowering his eyes to the crowds.

Here’s when Rattler was successful and why the pressure has been so brutal against SC this season; go to him once and his game unravels. Florida hit him enough, Tennessee not at all.

With all night in the bag, Satterfield’s man cover knockers were hilariously easy on Rattler. Mesh, daggers and hi-los all worked with Rattler to build confidence, Tennessee couldn’t reach him and defensive backs couldn’t keep up with man; or pulled out of position when they switched to soft cover 3 and cover 4 to try to stop the bleeding.

Shown above is another dagger concept with a man-defeating mesh below, against Tennessee in cover 3. A dig is a slow-developing route, taking the remote receiver about three seconds to get behind a hookzone defender, and Rattler had it. This was summed up in one game all evening: Satterfield had man and zone beaters in the same game, and Rattler rose in confidence due to a lack of any pressure and quite snowballing success. Tennessee let him play his game and he tore them to shreds.

So what was the difference between Florida and Tennessee? An oversimplification perhaps, but Rattler rattles under pressure. Needless to say, this bodes well for Clemson, but it’s no longer the surefire cakewalk we assumed for the first ten games of this year.

Though I also don’t think Rattler’s performance in Tennessee is fully reproducible. Rattler is better against man marking, and I definitely like SC’s receivers better than Clemson’s, but Clemson attacks the line of scrimmage and mostly zone. Get to Rattler early and force him to return to his hero ball antics.

Bell, Joyner and especially Lloyd are a real threat to SC on the ground despite poor line play, but it’s fair to say that Clemson has sorted out run fit issues at this point now that Barrett Carter and Trenton Simpson have substituted at WILL and SAM. Carter has been elite regardless of position, and Simpson is now back in the space where he deals the most damage. Jeremy Trotter Jr. MIKE is playing on a level we haven’t seen in ages. With the disparity in line play between the Clemson DL and SC OL, this side of the ball is heavily in Clemson’s favor unless lightning strikes twice in Rattler or Lloyd makes yards on contact.

The Gamecock defense moves in the opposite direction to their offense, and a similarly awful line-spacing stat haunts their line of scrimmage this side of the ball (2.98 line yards given up, 121st in the nation). It’s been a broken record here for a long time, but run the ball and win.

There are, of course, talented pieces on this Gamecock defense. Zacch Pickens and Jordan Burch were 5 stars Clemson wanted. Still, both have mostly underperformed compared to their rankings and the best matchup for their defense is (surprise surprise!) the one found at cornerback against the Clemson receivers.

Clemson has been very poor against man marking this year and the Gamecocks have three solid corners that we can expect to win wide more often than not. Nickel Cam Smith stands out to me the most, and it’s critical Clemson’s commitment to the run with Smith and their fragile freshman safety on the field. Not just because Clemson is at his best there, but second level defense was a real weakness.

Irrationally, I’m afraid South Carolina is on fire and Rattler will pick up where he left off against Tennessee. I’m afraid Clemson will have two or more turnovers for the fifth game in a row. I’m afraid Brandon Streeter will remain stubbornly enamored with 50+% RPO calls, having the defense dictate to DJ to hand over Clemson’s best weapons and throw an unblocked bubble screen. Whenever Clemson struggles, Streeter complains that he is not running the ball enough. Too many RPOs are the reason.

But the purpose of this column is to always focus on the rational insights from my own eyes, ignoring the fear and “what-ifs” that arose from last week’s remote Gamecock explosion. The talent, plans and nearly all matchups favor Clemson despite this newfound threat. There is no rational reason to get upset.

The formula for a Clemson win hasn’t changed, and it’s disarmingly simple. Go after Rattler early and emphasize the integrity of the Gamecock rift with Shipley and Mafah. Clemson is more than equipped for that. When and how much Clemson pulls away is highly debatable (when not?!), but the ultimate outcome remains likely.