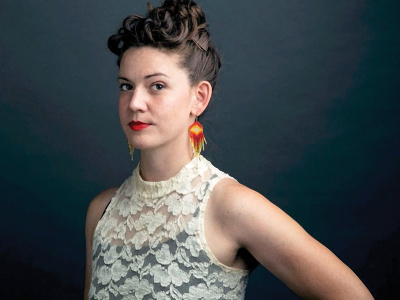 During the fight, CNN showed an image showing the racial demographics of voters in the Arizona presidential election — and for many Americans, it shifted the conversation to something else entirely.

Because, according to the image, “something else” was synonymous with “Native American.” The poll showed the percentage of voters classified as white, black, Latino, or Asian, but lumped the remaining 6% of exit poll respondents into the aggregate category of “something else” — according to the U.S. Census Bureau, Native Americans make up 5.3% of the people of Arizona.

“What CNN erased with that phrase ‘something else’ is actually quite serious. And that is the power of Native voters in Arizona,” Rebecca Nagle, an award-winning journalist and citizen of the Cherokee Nation of Oklahoma, told a crowd of nearly 50 people at a talk Nov. 17 at the Museum of the Cherokee Indian in Cherokee. .

Arizona went blue in 2020, an unexpected outcome that was critical to President Joe Biden’s victory. It turns out that the blue areas of Arizona overlap almost perfectly with its tribal lands.

However, Nagle was not in North Carolina to discuss the 2020 election results. She was invited to deliver Western Carolina University’s annual James A. Cooper Memorial Lecture in Cherokee Studies on campus and in Cherokee. She was there to talk about the reality of media erasure of Indigenous peoples – and the dire consequences it has for Native American tribes.

Nagle grew up in Joplin, Missouri, less than an hour from the border of the tribal lands of the Cherokee Nation in Oklahoma. Her culture has always been important to her and she has always loved to write, but she initially refrained from a writing career – she knew it would be a difficult path.

Then, while working as a community organizer in Baltimore, Maryland, Nagle began learning to navigate labyrinthine government bureaucracies and translate what she found into simple language that community members could understand.

She later wrote some opinion pieces about her work on sexual assault and domestic violence. Some of those pieces reached a surprisingly large audience.

“When I saw that impact, I thought, ‘Oh, this is something that can really change the conversation,'” she said.

Nagle has won a slew of awards, including the American Mosaic Journalism Prize, Women’s Media Center’s Exceptional Journalism Award, and a Peabody nomination. Her writing has appeared in publications such as the Atlantic, the Washington Post, The Guardian, USA Today, and Indian Country Today, and her “This Land” podcast provides groundbreaking reporting on issues critical to tribes and tribal sovereignty. The most recent season explores a lawsuit to scrap India’s child welfare bill, and all the dominoes that could fall if the lawsuit prevails.

“These are not minor subjects,” said museum director Shana Bushyhead Condill as she introduced Nagle Nov. 17. “I admire Rebecca’s courage and tenacity as she tackles these huge cases and the tangled web of jurisprudence, history, motivation and stakeholders. Spoiler, it’s never about the superficial conversation.

As Nagle outlined in her speech, the under-representation of Indigenous peoples in the media goes far beyond CNN’s unfortunate Election Night chart. She cited research by Dr. Stephanie Fryberg showing that in an analysis of 2,300 on-screen television characters between 1987 and 2007, only three were native; in a 2015 study that looked at the top 100 Google Image search results for “Native American,” 95% were historical images. Early reporting on racial disparities in COVID effects often left out Indigenous peoples, and in many cases state data did not record Native Americans as a distinct demographic, meaning the true toll of the pandemic on Indigenous communities will likely remain unknown.

“Because people don’t see real, living, breathing Indigenous people, it makes us less real,” Nagle said in her speech. “I feel like we’ve all had that moment. I’ve had people say really weird things to me, like, ‘I didn’t know Indigenous people still existed.’”

Such ignorance leads to awkward moments for individuals and dangerous moments for tribes. On the most recent season of “This Land,” which ended in October 2021, Nagle investigated a Texas federal lawsuit challenging the constitutionality of a 1978 law, the Indian Child Welfare Act. ICWA sought to end the epidemic of Indigenous children being removed from their homes and communities, and the outcome of the lawsuit could have detrimental effects on tribal sovereignty.

ICWA contains several provisions related to custody cases involving Native American children, including a preferential order for adoptions. The first preference is for a member of the child’s extended family, the second for an adoptive family within the child’s tribe, and the third for members of other Native American tribes—non-Native families cannot adopt until these options have been exhausted. The law was passed shortly after the end of the boarding school era and at a time when 25-35% of Indigenous children were being evicted from their homes. Of these, 85% were placed outside their tribal communities, even if relatives were willing to take them in.

But in a 2018 ruling, U.S. District Court Judge Reed O’Conner found that ICWA codifies unconstitutional discrimination based on race, jeopardizing the entire law. The case went all the way to the Supreme Court, which heard oral arguments on Nov. 9 and is expected to issue a ruling in late spring or early summer.

By ruling that ICWA’s adoption preferences are racially discriminatory, O’Conner overturned centuries of precedents establishing Native Americans as a political group—not a racial group. When Europeans colonized North America, they came into contact with existing sovereign nations of indigenous peoples. Although they pushed them out through physical force and manipulation, the relationship was that of hostile nations. Many tribes signed treaties with the United States, binding documents that indicate a relationship between governments.

Indigenous lands are not like city neighborhoods populated by a particular ethnic group. They are like countries governed by a separate government structure.

“The fear is that if they can topple ICWA with this argument, literally the entire federal Indian law could be next,” Nagle said in her speech. “So if ICWA is unconstitutional discrimination, what about the clinic I go to for my health care? If ICWA discriminates against non-Indigenous foster parents, what about laws that allow tribes to operate casinos where non-Indigenous casino operators are not allowed to operate casinos?”

There is, as Condill said, a “tangled web” of motivations spurring ICWA’s detractors, but when tribal sovereignty is compromised, so is the general public’s ignorance of tribal issues — underlined and exacerbated by under-representation and misrepresentation. of things in the media – part of the problem.

“We will not have federal judges and members of Congress and US presidents who understand and enforce tribal sovereignty until we have a voting citizenry that does,” Nagle said on Nov. 17.

That will take effort from the news media – a commitment to reaching out to Indigenous communities, spending time building relationships with them and becoming students of Indigenous history and perspective.

There have been some glimmers of promise in recent years. In her speech, Nagle pointed to the Standing Rock Sioux protest against the Dakota Access Pipeline as a turning point, saying that for the first time in her life, her Native friends and her non-Native friends on social media were talking about the same thing. media.

But there is still a long way to go and the stakes are high.

“What is at stake are laws and policies that affect people’s lives and the sovereignty of our tribe,” Nagle said. “I think journalists recognize that in other areas. There has been a big question about how important the press is in our democracy at a time when it feels like it’s under attack. I would hope that people would think that the survival and sovereignty of indigenous nations is also an important part of our democracy.”

Rebecca Nagle’s award-winning podcast “This Land,” distributed by Crooked Media, is available on a variety of podcast platforms.

Over the course of two seasons so far, “This Land” has explored the Oklahoma v. Castro-Huerta case and its implications for tribal land restoration, and how a case challenging the Indian Child Welfare Act threatens the entire legal structure around Native American rights.