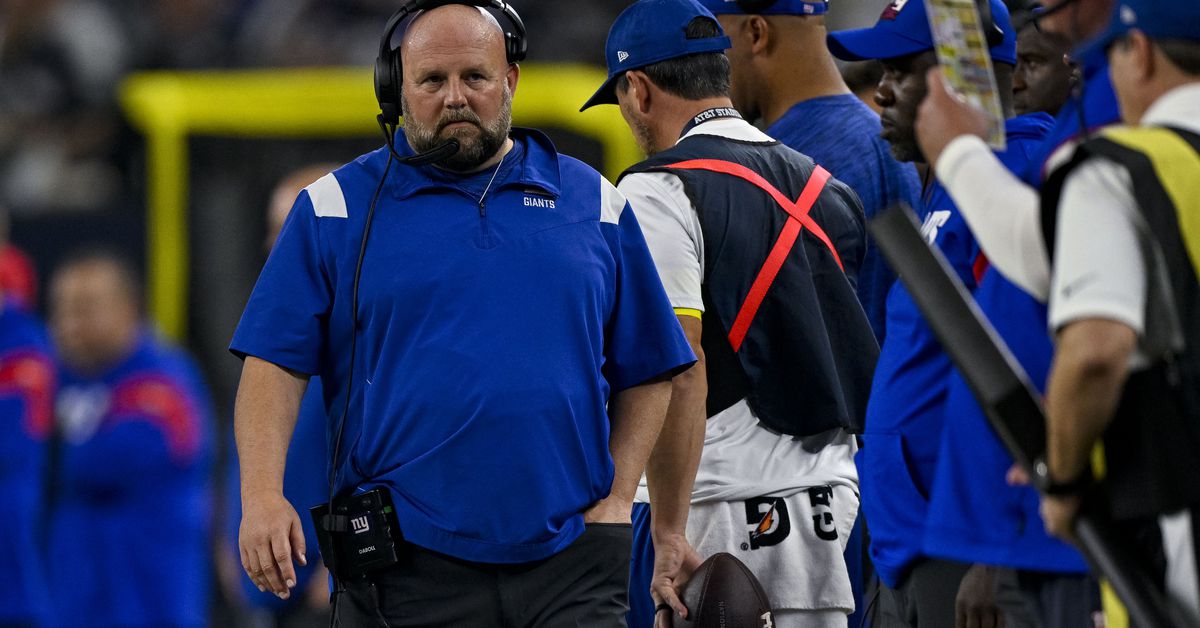 Prior to Thursday’s New York Giants-Dallas Cowboys game, I laid out what I thought was the Giants’ narrow path to disruption of the much-loved Cowboys.

Here’s part of what I wrote:

How can the Giants upset the Cowboys on Thursday?

They have to play the game on their terms. They should be able to follow the formula that has enabled them to win seven out of ten times they have been on the pole this season.

They couldn’t do those things against the Cowboys. Consequently, the Giants lost a game. We’ve been talking a lot lately about how narrow the Giants’ margin of error is, especially as injuries are on the rise. Thursday was an example of how the Giants, as gritty, determined and resourceful as they are, have a hard time dealing with good teams when they miss opportunities and can’t stick to their script.

On Jame Gillan’s first kick of the game, Nick McCloud missed a chance to pin Dallas at the 1-yard line and drop the ball in the end zone. That started a day full of “almost” for the Giants.

Dallas turned the ball over on downs on its own 40-yard line on the first possession of the game, with a curious decision to go for it by head coach Mike McCarthy backfired.

The Giants could only convert that into a 57-yard Graham Gano field goal, though an apparent Daniel Jones to Isaiah Hodgins 24-yard touchdown pass was negated by a questionable illegal man downfield penalty on right tackle Tire Phillips.

Like it or not, the call was made and it ended up costing the Giants four points.

On Dallas’ second possession, Rodarius Williams intercepted Dak Prescott to end a Cowboy drive at the Giants’ 31-yard line. The Giants offense went three-and-out. That wasn’t a short field, but it was a turnover the Giants didn’t capitalize on.

That’s two chances in the first quarter for the Giants and just three points.

In the second quarter, the Giants pinned Dallas on their own 7-yard line on a punt with a Cowboys penalty. The Giants couldn’t turn the field and let Dallas go 93 yards in 11 plays for their only points of the first half.

Before that Dallas drive even started, Daniel Jones missed an open Richie James on a third and fourth pitch that would have been a Giant first down.

Dallas went 75 yards in 14 plays for a touchdown to open the third quarter. That Cowboys drive probably never should have taken off. Kayvon Thibodeaux was a force all day, but on the second play, he missed a sack that turned into a 5-yard Prescott run and helped Dallas start their drive.

There was a questionable guard call on Darnay Holmes on third and seventh at the Giants’ 37-yard line that kept the drive alive. However, the Giants also failed to stop the Cowboys on a third-and-12 and gave up a touchdown on a third-and-goal from the 15-yard line. Frankly, that should never happen – not even with an exhausted secondary.

The Giants’ defense struggled for third all day, much of it third and long situations, allowing Dallas to convert 7 of 11 (63.6 percent).

On Sunday, the Giants started second in the league in the red zone defense, giving up touchdowns just 43.59 percent of the time. On Sunday, Dallas went 4 of 4 on opportunities in the red zone.

The botched fourth-and-1 conversion came next, and it really was the back breaker. The score was 14-13 in Dallas at the time, and the Cowboys then scored consecutive touchdowns to break open the game.

Just watch the whole room as Daniel Jones makes a better throw (and catches Saquon Barkley). It feels like they’ve been waiting all year for that piece to open.
pic.twitter.com/5h0LkjiPpm

“I thought it was a good chance to go ahead and come down first, but we didn’t get it,” head coach Brian Daboll said. “I felt we had to change the momentum a bit after the second half. They went down and scored. I thought mike [Kafka] had a good game ready to go. We had a shot at it. I thought this was the right thing to do.”

It was. The players just didn’t perform. That includes the quarterback, the intended receiver, and whoever was the 11th man who was supposed to be in the game, but never made it onto the field. That lack of an 11th man could be why Jones ended up rushing a bit and not falling on target.

Jones, who threw a somewhat foul pass, and Saquon Barkley, who should have caught the ball anyway, both tried to take the blame. That’s good, because both deserved a share of the blame.

Jones needs to throw a better ball. The illustration above shows how much room Barkley would have had to run if Jones could have hit him with a pass instead of putting the ball on his back hip.

Still, Barkley is the Giants’ best player. They designed a game to give him the ball on the biggest play of the game, Jones gave him a ball he could grab with both hands and the ball must be caught.

Former Giants coach Tom Coughlin used to talk about players having to play above the X’s and Os at critical times to win games. In that case, Barkley didn’t and it turned out to be the missed opportunity that opened the floodgates for the Cowboys.

“I think we missed some opportunities,” said Daboll. “We have to do better. It starts with me.”

What next for the Giants?

At 7-4, the Giants would be the sixth seed in the seven-team NFC playoff field. However, the Giants have lost three of four games and FiveThirtyEight have now dropped their playoff odds to just 47 percent.

Coach Brian Daboll was irritable Thursday night, short with some of his answers to questions from reporters making the trip to Texas. However, he gave a comprehensive answer on what the Giants could do to get back on track.

“Just come back, do the same things we always do every week. Get ready to play a game, get some rest. Obviously it’s been a tough 12 days – we didn’t get the results we were looking for. But I think we just need to get some rest, mental recovery, physical recovery, come back on Monday and get ready for another division game,” said Daboll. “They are not getting any easier. Every week is tough and we stick with our practice, our preparation, all the things we have to do to try and keep going and give us a chance to win a game. It is the ebb and flow of a season.”

Jones also tried to play down any concerns that the Giants, losers of three of their last four games, could slip things out.

“We have a really good chance for the future. We know we have some big games ahead of us and we’ve put ourselves in a good position,” said Jones. “We need to heal and take advantage of this long week and go back and learn what we have to learn from this movie. still very confident. We are 7-4. We still have a lot to achieve.”

The Giants need to get healthy. The cornerbacks they used on Thursday fought hard and played well, but Adoree’ Jackson and Fabian Moreau were missed. So was the plethora of offensive linemen left in New Jersey. Wan’Dale Robinson and Sterling Shepard – who won’t be back this year – also. Tight end Daniel Bellinger would be a nice addition.

The Giants have 10 days before they face the Washington Commanders in a critical game. Hopefully they will field a healthier team.

They need to find out why Saquon Barkley, who led the league in rushing a few days ago, has scored just 22 and 39 yards in the last two games.

Daboll talks about execution all the time. Frankly, the Giants may not be the more talented team in any of the six remaining games they play this season. If they don’t execute, if they don’t take advantage of the opportunities they get, they don’t win. They have to eliminate the missed sacks, costly penalties, missed catches and missed throws.

They still have a chance to make the playoffs. However, they must be better or else they will miss that too.

Are they good enough to get better? Or are the restrictions that we knew were there but bubbling beneath the surface earlier in the season catching up with them?

That’s what we’re going to find out over the next six weeks.