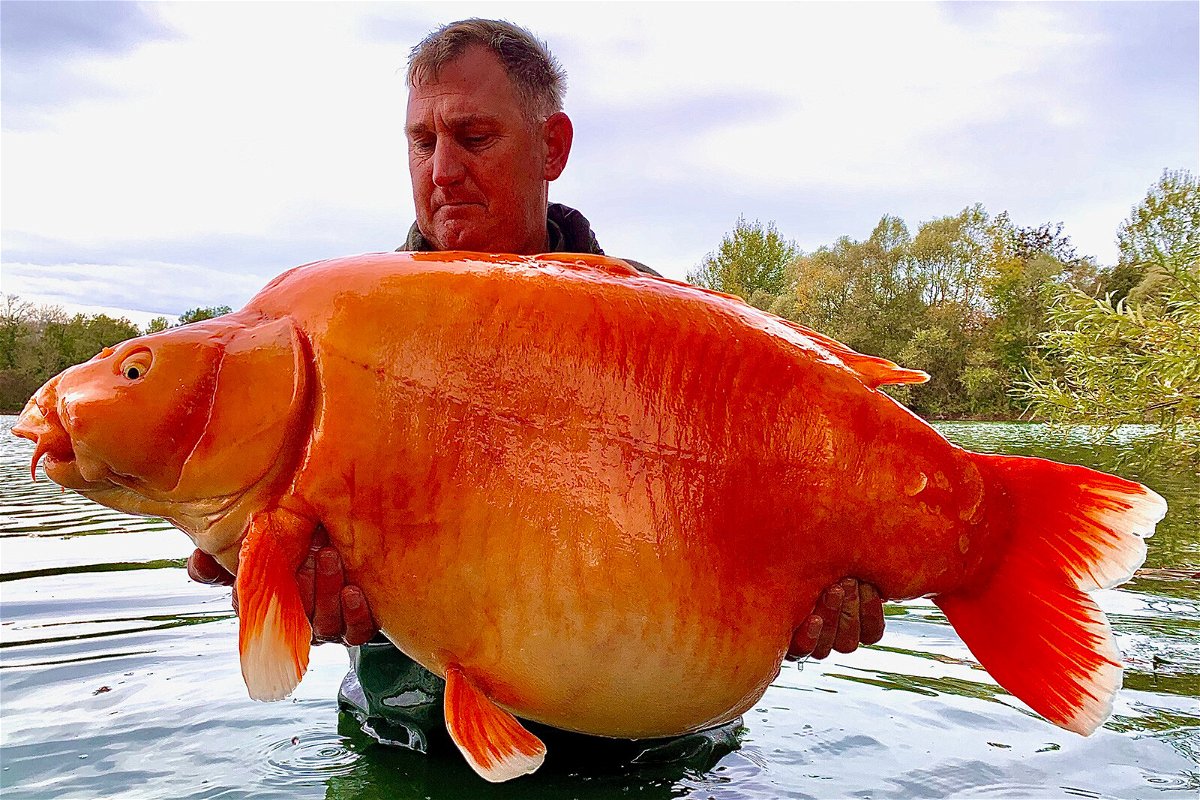 Here’s a fisherman’s story that isn’t a tall tale.

After a 25 minute fight, British angler Andy Hackett caught a colossal carp, nicknamed “The Carrot”, weighing a whopping 30 kilograms. According to BlueWater Lakes, the fishery in France’s Champagne region where the giant lives, the giant fish is believed to be the second largest of its kind ever caught.

With its striking orange color, the huge goldfish-like creature is easy to spot as it swims below the surface of the water. However, the Carrot has proved challenging to catch. Hackett landed the prized fish, a hybrid of a leather carp and a koi carp, on Nov. 3 while visiting the lake.

“With normal fish you struggle to see them when they’re just below the surface, but The Carrot is clearly bright orange so you can’t miss it,” Hackett told the BBC. “It’s a sought after fish. Not many people have caught it. It’s quite elusive.”

BlueWater Lakes offers anglers a private place to try and reel in one of the many fish that weigh over 50 pounds (22.7 kilograms) – and some even over 90 pounds (40 kilograms).

“We introduced The Carrot about 20 years ago as something different for the customers to fish for. Since then it has grown and grown, but it doesn’t get out very often,” fisheries manager Jason Cowler told the Daily Mail. the largest inhabitant of the lake, but by far the most striking.”

The fishery has followed Carrot’s growth quite often as she was reeled in nine times by anglers last season. After breaking the 60-pound (27-kilogram) mark for the first time in February, the carp swam free for nine months until Hackett reeled her in.

The average domesticated goldfish weighs less than a pound, but the species can grow to much larger proportions under varying conditions. Given plenty of space, with the right diet and water conditions, carp species including goldfish and koi have the potential for a large amount of growth, which explains Carrot’s impressive size.

Often the largest goldfish found are unwanted pets released into the wild by their owners. Discarded animals can negatively affect the delicate balance of a natural habitat. In July 2021, football-sized invasive goldfish were found in a lake in Burnsville, Minnesota, leading to city officials pleading with residents not to release their aquatic animals into the lake as they could harm the local environment.

“A 70-pound carp is a really big, impressive fish,” says Dr. Zeb Hogan, a research biologist at the University of Nevada, Reno, and former host of the “Monster Fish” show on the National Geographic Channel. “There are actually several species of carp that are related to goldfish, that grow very large, that are found in Europe and Asia — some of which can grow up to 500 pounds.”

The growth seen in these hefty fish is called indeterminate growth, according to Hogan, a condition in which animals grow rapidly when young and continue to increase in size after reaching maturity.

“They just keep growing the longer they live,” Hogan said. “It’s just going to keep growing and getting bigger, and maybe in a few years someone else will catch it and it will be even bigger.”

The fisheries team said on Facebook that Carrot is “in excellent health and condition” and could live another 15 years or more. “May her fame continue for a long time,” the team added.

Top image: Fisherman Andy Hackett lands one of the world’s largest goldfish ever caught. The giant orange specimen, aptly nicknamed The Carrot, weighed in at a whopping 67 pounds, 4 ounces.