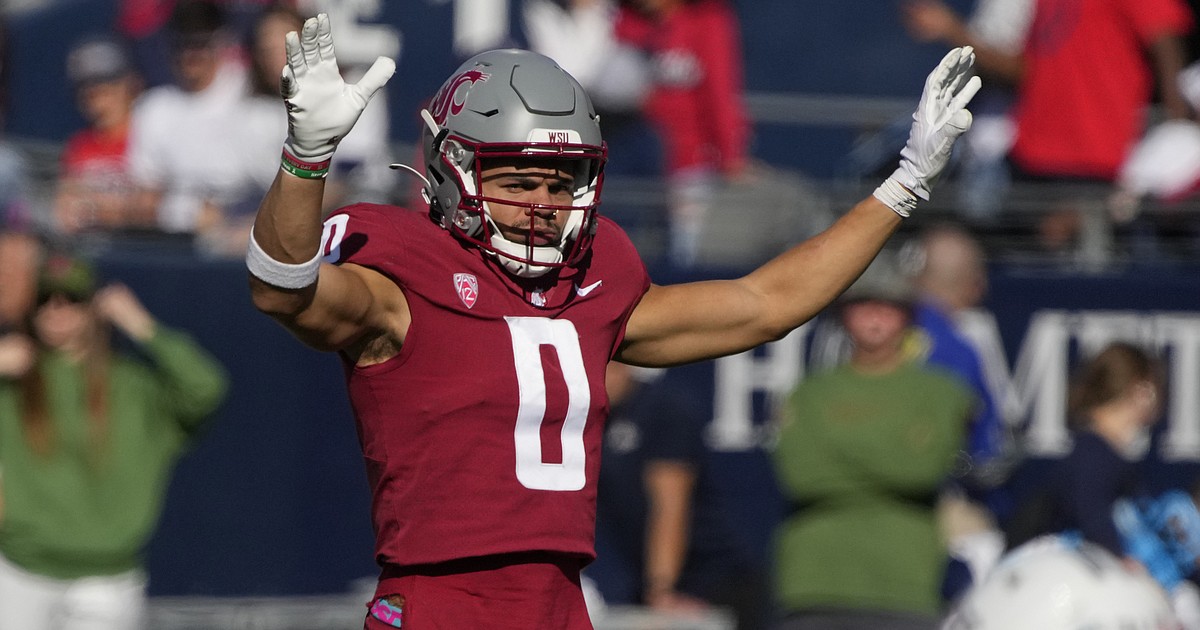 Teams across the country are preparing to take on their rivals in the final week of the college football season, including the Washington State Cougars and the No. 13 Washington Huskies, who have their sights set on the Apple Cup.

“Everything we do in this building will remain the same,” WSU head coach Jake Dickert said at a news conference Monday. “But the energy, and what it means for everyone, is of course elevated quite a bit. Excited about the challenge of taking on a really good team from across the state in the Apple Cup.”

WSU snapped its seven-year Apple Cup losing streak with a 40-13 win last season, the most lopsided victory for the Cougs in the rivalry’s 121-year history.

“The ’21 team deserved that Apple Cup, so we’re still in the mindset of not defending, we’ve got to take it,” Dickert said. “I think this is a mindset that this team has to earn, and I clearly know that they (Washington) want it. It’s a great rivalry.”

The Huskies clinch a College Football Playoff No. 13 ranking when they come into Pullman on Saturday, with the team possessing the prowess to put points on the board with their powerful offense. UW quarterback Michael Penix Jr. leads the entire Football Bowl subdivision in passing yards this season with 3,869 yards.

“They are talented, but now they are being coached extremely well,” said Dickert. “They are disciplined, they are very versatile in attack. The quarterback, Penix, gave them a shot. This man is just one of the most accurate passers-by I think I’ve seen in a long time.”

More impressively, Penix, who has thrown the ball 457 times this season, has been sacked just five times in 11 games. The Cougar defense has managed to get sacks on the quarterback blitz, though it makes them susceptible through the air.

“When we do blitz, we’ve been really productive,” said Dickert. “That’s where a lot of our layoff totals come from, and our disruptions and our approach to losses. We need to have a nice mix of that, we need to be able to challenge them in some man-to-man positions.

Defensively, the Huskies rank in the top third of the Pac-12 in points allowed per game, total yards allowed per game, and sacks. However, they are in the bottom half of the league in terms of running defense, having allowed 131.7 yards per game to opponents this season. With WSU running back Nakia Watson sparking the Cougars in his return, the trenches are where the game can be decided.

“It’s a very different style to last year, last year they were just like us, a defense of mainly one high,” said Dickert. “Now they’re flattening it down to a two-high safety look, some match coverage and some blitz stuff. I think their success is paramount.”

Along with Watson, the Cougar offense got another boost last week when receiver Renard Bell returned from injury. The seventh-year receiver caught seven passes in his return against Arizona last week, a team-high.

“It felt like the first time in five weeks that we had all of our guns,” Dickert said. “I think our offensive line has done an admirable job of what we’ve asked them to do, and we’re off to a quick start. We just have to keep the accelerator on.”

Playing a pass-happy offense in Arizona last week helped prepare WSU for another one this week, after intercepting Wildcat quarterback Jayden de Laura four times in the second half and stopping Arizona twice at fourth in the win .

“You saw last week, if we attack football, we can start making those actions,” said Dickert. “Four interceptions, I think there is confidence in it. Interceptions are a lot of things – I thought we were interfering with the passer, we weren’t letting him get into throws and a little unsettled him. It enabled us to go out and do some of those plays.

While rivalry games dominate the headlines, quarterback Cameron Ward — who is playing in his first Apple Cup — said he treats it like any other game.

“It’s a lot of energy around the building,” Ward said. “Specifically for me, it’s just a different game. I try to approach every game by saying that my preparation will be the same. This game has a bigger tag, there’s a bigger history behind it. That’s all we want to win for, we want to win it for Washington state, Washington state, up for all the Cougs out there. It’s just a different game for us, but we know what weighs on it.”

The seriousness of the Apple Cup can be felt right through to the recruitment, with players getting a glimpse of the rivalry as they enter the campus.

“That was the first thing Coach Dickert showed me, he took me and my parents into the trophy room and showed us the Apple Cup,” said Ward. “He said, ‘We intend to keep it here, if all goes well.'”

The Cougs have scored at least two touchdowns in their previous three games, something Washington needs to keep up with.

“Just play within the system,” Ward said. “Not trying to make outside plays that we haven’t done all season, just playing with the right technique that we have that coaches have prepared for us every week.”

The Cougars and Huskies kick off Saturday at 7:30 p.m. in Pullman.

“Being able to play in a big rivalry game like this, for Washington State, to try and win is something I know Coug fans want,” said Ward. “Hopefully we get the job done.”

Ian Bivona can be reached at [email protected]