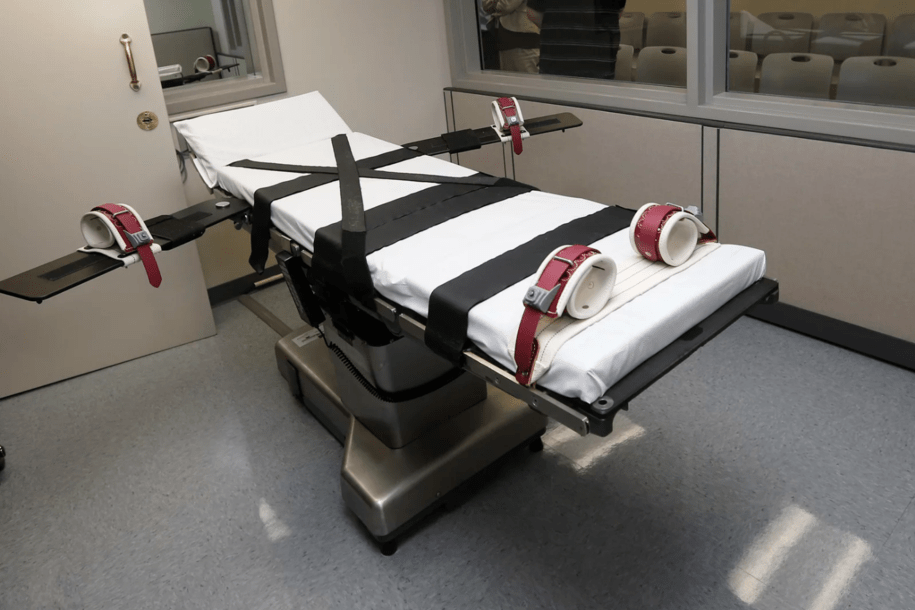 Alabama Governor Kay Ivey has was looking for a break in executions and ordered a “top-to-bottom” review of the state’s death penalty system. Have the good Christians in Dixie’s heart come to their senses and realized that the death penalty is inconsistent with their “pro-life” philosophy? No. Ivey wants the break because Albama doesn’t know how to kill people.

Last Thursday, the state attempted to execute 57-year-old Kenneth Eugene Smith for the 1988 murder-for-hire of a pastor’s wife. They failed. As the AP reported,

Correction Commissioner John Hamm said prison staff spent about an hour trying to connect the two required intravenous lines to Smith, 57. Hamm said they established one line but failed to do so with a second line, which is required by state protocol as a backup. after trying different locations on Smith’s body.

Officials then tried a central line, which involves placing a catheter in a large vein. “We didn’t have time to wrap that up, so we called off the execution,” Hamm said.

In their failure, the Alabama authorities, like all true conservatives, shifted the blame. In this case, they pointed the finger at the clock. The Supreme Court had cleared the last hurdle to Smith’s execution by 10:20 p.m. The execution order expired at midnight. So they had “only” 100 minutes to flip the switch.

Not that they had to start from scratch. Smith was strapped to a gurney in the death chamber (for four hours by some reports). All the state-sanctioned killers had to do was reel in the IV lines and they were off to the races. They couldn’t get it done.

In itself, this would be an indictment of the system. However, it was the second failed run in line. Two months earlier, in September, the state called for the execution of 57-year-old Alan Miller after poking him with needles for more than an hour to find a vein. Miller claimed that at one point they had him hanged vertically from a gurney.

There is more. In 2018, the state called for a third execution when authorities could not determine an IV line in Doyle Lee Hamm – who later died of natural causes in prison.

Alabama is not alone in this sadistic incompetence. Last Wednesday, Murray Hooper, convicted of a 1980 double murder, lay tied to a gurney at Eyman Prison in Arizona, waiting to be lethally injected. Officials failed several times to place an IV to deliver the execution drugs. Finally, they put a catheter in the femoral artery near his groin. In this case, the many failures did not stop the state from killing the convicts. And Hooper is no more.

On the same day Hooper drew his last, Texas authorities were equally tireless in killing Stephen Barbee, 55, whom the system had convicted in February 2005 of murdering his pregnant ex-girlfriend and her young son. It also took them an hour and a half to find a vein to deliver the lethal injection drugs.

The next day, Oklahoma dispatched Richard Fairchild, 63, for the 1993 murder of his girlfriend’s three-year-old son. In this case, there were no reports of delays as officials scrambled to access his veins. Here was the barbarity that Fairchild should not have been on death row in the first place.

Fairchild’s attorneys said he grew up in an abusive family, suffered from alcohol and substance abuse at a young age, and suffered head trauma as a teenage boxer, all of which may have later impaired his moral judgment. Despite these warning signs, his original attorneys never took them to court, though the Supreme Court has determined that such factors may preclude a death sentence.

This brings us back to Arizona and the murder of Murray Hooper. He is another man who drove racism, bias, dubious evidence, coerced confessions and police brutality into the death house. His story is complicated, so bear with me.

Originally from Chicago, Hooper was eventually arrested for triple murder in Illinois. I write “eventually” because he was targeted by Illinois officials only after Arizona authorities designated him a suspect in a Phoenix double homicide.

The official timeline was that Hooper committed the triple murder in Chicago. He then traveled to Arizona where he committed the double murder. Then he returned to Illinois. In Illinois, officials used his possible involvement in the Arizona murders as a reason to arrest him for the Chicago murders. He then suffered from the brutality that the Chicago Police Department used against black suspects. He was found guilty and sentenced to death. But the death sentence was rejected by an appeals court on the basis of prosecutorial misconduct. However, it was too late for Hooper in Arizona.

Arizona authorities had used his Illinois conviction as motivation to manipulate the evidence against Hooper in the Phoenix murder of William “Pat” Redmond. The case against Hooper rested essentially on the eyewitness testimony of the victim’s wife, Marilyn Redmond. Police said they picked Hooper from a lineup, but they did not provide video of the identification. And Redmond had previously stated that she would not be able to recognize her husband’s killers, one of whom she identified as black and the other as white.

This piece in the Independent newspaper, “Racism, Horrific Mistakes, and Botched Executions: Inside America’s Quadruple, 48-Hour Execution Wave” outlines the details of the utter depravity of the prosecution in the Hooper case.

Proponents of capital punishment can find cases of depraved murder both so despicable and so open and closed that even the most seasoned liberal will feel a deep-seated desire to flip the switch. But that is not a sufficient argument to support a trial that has sent some innocent people to their deaths. And for whom many other deaths, whose lives are so full of extenuating circumstances, imprisonment was the better solution.

Besides, what’s so “soft” about a life sentence in a small concrete box with no possibility of parole?