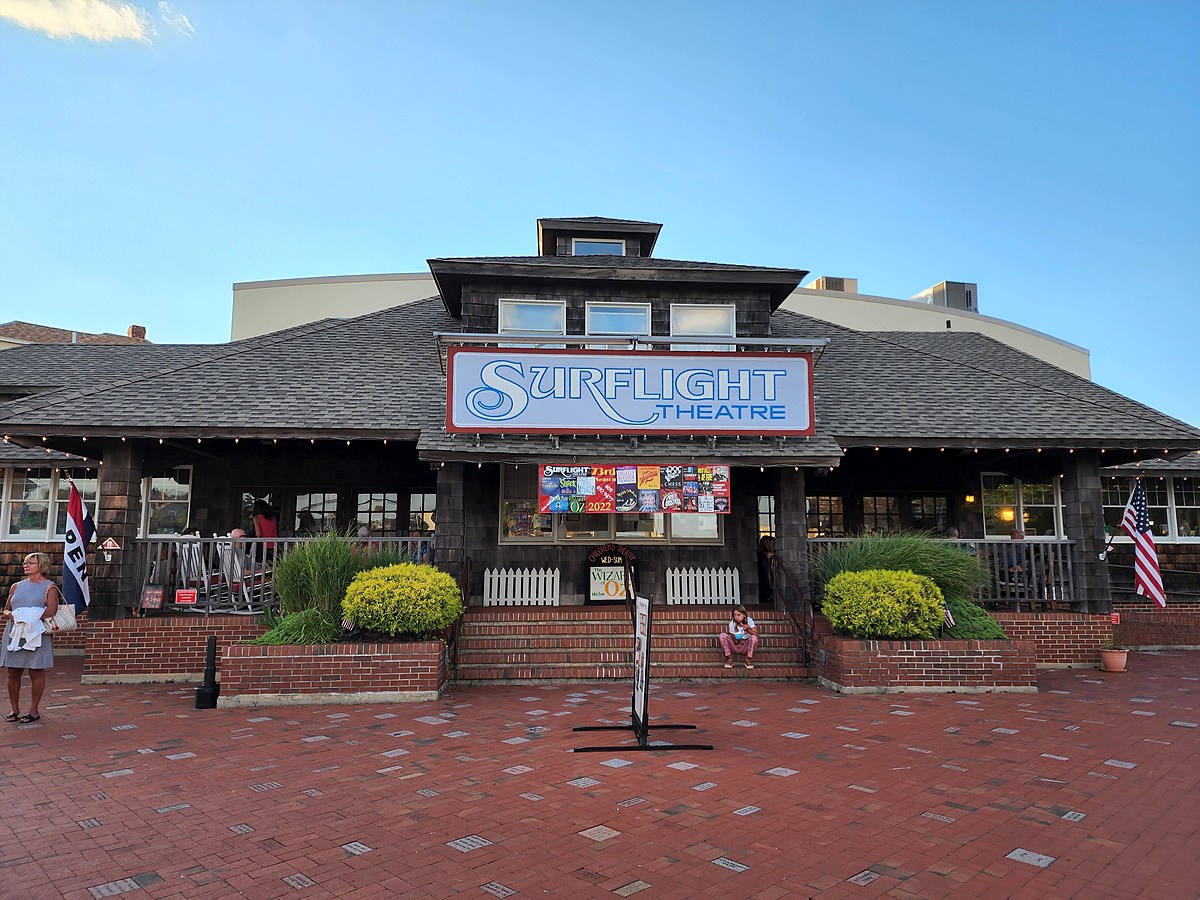 Located in Beach Haven, NJ on Long Beach Island, the iconic Surflight Theater has been offering “Broadway at the Beach” shows almost continuously since 1950.

The past decade has been Surflight’s most challenging. After suffering heavy damage and flooding from Superstorm Sandy in 2012, Surflight went bankrupt and closed its doors in 2015. It reopened in 2017 under new ownership. As the COVID-19 pandemic shuttered theaters around the world, Surflight returned to its roots. Both the 2020 and 2021 seasons were presented in a marquee at nearby Veterans Memorial Park, following all CDC and NJ Department of Health guidelines.

Productions will return indoors from 2022. According to a letter sent to clients by producing artistic director Steve Steiner, Surflight “hopes to match our 2019 attendance numbers in 2023.”

Surflight’s formula for success is simple. They audition and hire top talent from New York and beyond. Much of the cast spends the summer living in theater-owned homes in Beach Haven, playing multiple roles in multiple shows. The sets and orchestrations are simple. The singing, dancing and acting talents are top notch. And tickets are affordable, with great views from every seat in the house.

TRAFFIC IN NYC TOO MUCH? See Quality Theater in NJ

In 2022, Surflight screened stagings of The Addams Family, Legally Blonde, Escape to Margaritavilla, Chess, The Fields of Ambrosia, Murder on the Orient Express, and White Christmas.

On Tuesday, Surflight announced via Facebook the nine shows that will be part of their 2023 mainstage season.

They will also host one-off performances, including comedy shows and tribute concerts. And don’t forget that the Showplace Ice Cream Parlor is right next door, serving delicious desserts by singing “waitri”.

Steel pier… June 1-17, 2023… Although this Kander and Ebb musical was only on Broadway for three months in 1997, Steel Pier was nominated for 11 Tony Awards. It’s set in Depression-era Atlantic City, NJ, just 17 miles down Surflight Beach, by the way. While the show wasn’t a huge hit, with songs that aren’t incredibly memorable or long-lasting, it’s a charming love story with some grand dance numbers. (Surflight’s choreography and dancing skills always impress.)

State Fair … June 21 – July 8, 2023 … A 1945 musical that transports audiences to 1940s Iowa as an eclectic cast of characters prepare for the State Fair. Antics ensue. It’s a catchy “classic” Broadway musical—no surprise, since music and lyrics were written by Rodgers and Hammerstein, respectively. It hit Broadway in 1996 and was nominated for 2 Tony Awards. As long as the casting is good, this is going to be a fun one. Perfect for the 4th of July timing. The opening number “Our State Fair” will stay in your head for days.

Midway through… July 11-30, 2023… A recent (2015) “jukebox musical” featuring music by the Go-Go’s. Yes, “We Got the Beat” and “Our Lips are Sealed” and “Vacation” are all part of the show, woven into a romantic, comedic fantasy set in the distant and long ago but modern kingdom of Arcadia. Yes, this is a weird one. But certainly an entertaining and lively romp, starring that great 70s and 80s soundtrack.

Annie Warbucks… August 1-20, 2023… The sequel to the classic, award-winning 1977 “Annie.” In fact, this one picks up right where the original left off. Hijinks, song and dance, cute orphans, you get the idea. It never made it to Broadway, but had a very successful off-Broadway run in 1993-1994. We can only hope that Steve Steiner, Surflight Theater’s producing artistic director, reprises his role as the one and only (and very bald) Daddy Warbucks, which he played to thunderous applause in “Annie” in 2021.

Disaster!… August 22 – September 3, 2023… Back to the 70s, with another jukebox musical comedy. Co-written by walking Broadway encyclopedia veteran musical director and pianist, Sirius-XM On Broadway host, and Surflight alumnus Seth Rudetsky. The story parodies disaster movies from the 1970s, in which the Barracuda, New York’s first floating casino and discotheque in New York, ravages one disaster after another. The cast is small, which should play out perfectly on Surflight’s stage. The 1970s music is the real star here – just about every song is a classic hit.

Grumpy Old Men…September 6-24, 2023… A 2018 state musical based on the 1993 film. Evil neighbors face each other in hilarious antics punctuated by music and laughter. Surflight likes to experiment with lesser known shows after the busy summer season. And this one has the name recognition to be a September hit.

Popcorn Falls… September 27 – October 1, 2023… Never heard of it? Me neither. The story goes as follows. A small town is known only for its eponymous waterfall. It has dried up. So to save the town from financial ruin, the residents must put on a play. Can Surflight prove that art can indeed save the world?

Dracula: A Comedy of Terrors… October 6-15, 2023… This seems to fit well into Surflight’s October schedule. It’s Bram Stoker meets hilarity. Think “Young Frankenstein,” but wilder and funnier. Five actors play a cast of dozens. I have to admit this might be worth making a special fall drive to LBI to check out.

A Christmas Story: The Musical… December 2-17, 2023… You gouge your eyes out! The cherished 1983 Jean Shepherd film premiered in 2012 as a Passek and Paul musical on Broadway. You may have seen the “A Christmas Story Live!” special that aired on FOX television in December 2017. It’s the same story you know and love, with energetic and incredibly catchy songs throughout. For decades, Surflight has done a phenomenal job with their Christmas show, and I’m sure this will be no different. Again, I hope they get the right cast – especially for the narrator, young Ralphie, and the old man – and it will really sparkle.

Top 10 fun things to do on Long Beach Island

The scenic back roads to Long Beach Island

Every movie theater candy, ranked from worst to best