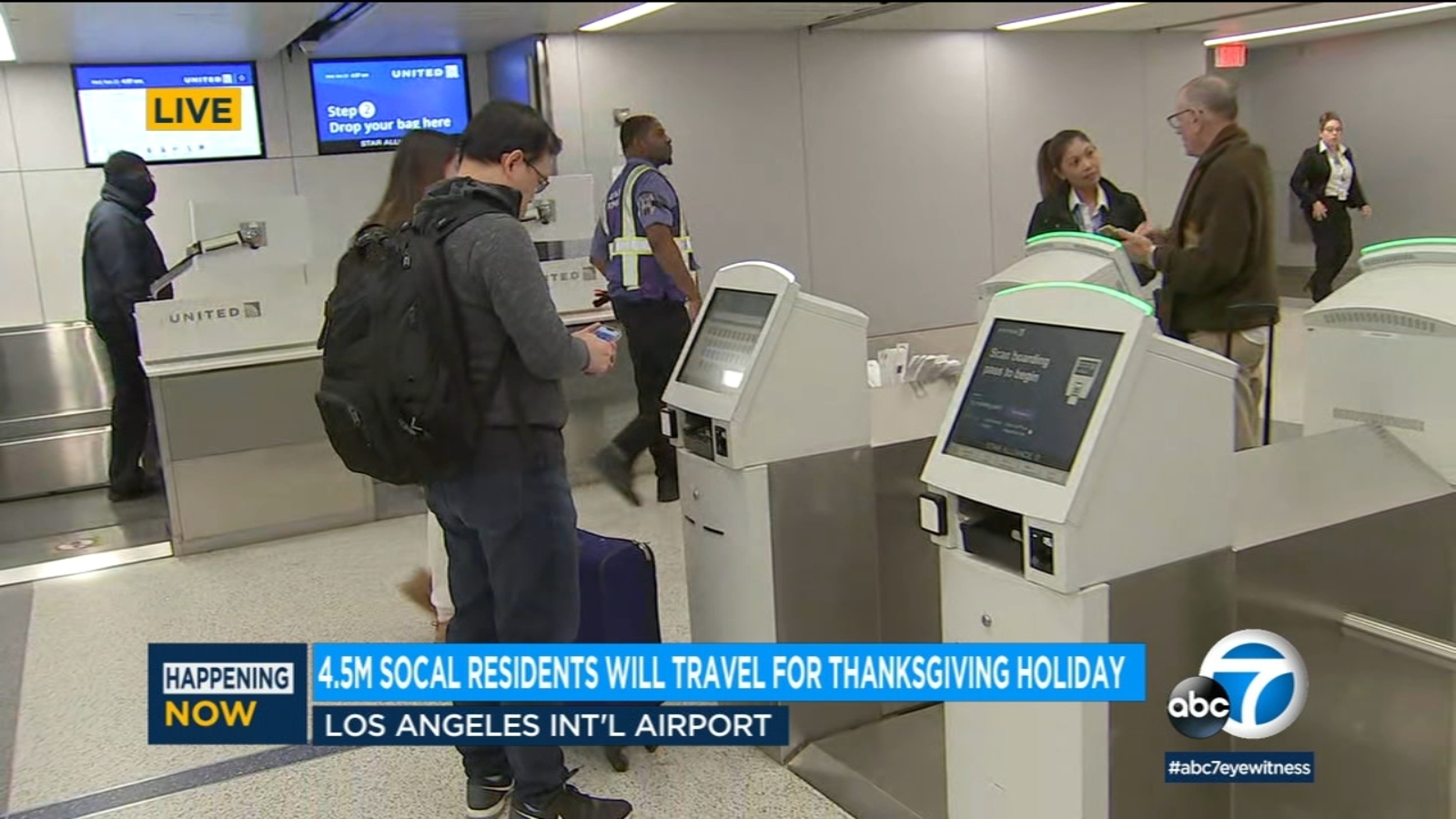 LOS ANGELES (KABC) — About 4.5 million Southern California residents — a record number — are expected to travel for this year’s Thanksgiving holiday.

The Automobile Club of Southern California’s forecast shows the highest number of Thanksgiving trips since the organization began tracking such activity in 2000, said Doug Shupe, a spokesperson for the AAA.

The Transportation Security Administration screened more than 2.6 million travelers Monday, more than the 2.5 million screened the Monday before Thanksgiving in 2019. The same trend occurred on Sunday, the first year the number of people taking planes on Thanksgiving week surpassed pre-pandemic levels.

“People travel on different days. Not everyone travels on that Wednesday night,” said Sharon Pinkerton, senior vice president at the Airlines for America trade group. “People are spreading their travel throughout the week, which I think will also help operations run more smoothly.”

AAA predicts that 54.6 million people will travel at least 50 miles from home in the U.S. this week, up 1.5% from last year’s Thanksgiving and just 2% less than in 2019. The auto club and insurance retailer says nearly 49 million of those will travel by car, and 4.5 million will fly between Wednesday and Sunday.

US airlines struggled to keep up as passenger numbers soared this year.

“We’ve had a challenging summer,” said Pinkerton, whose group speaks for members like American, United and Delta. She said airlines have cut their schedules and hired thousands of workers — they now have more pilots than before the pandemic. “That is why we are confident that the week will go well.”

U.S. airlines plan to operate 13% fewer flights this week than during Thanksgiving week in 2019. However, using larger planes on average will only reduce seat count by 2%, according to data from travel researcher Cirium.

Airlines continue to blame flight disruptions due to a shortage of air traffic controllers, especially in Florida, a major vacation destination.

Controllers, who work for the Federal Aviation Administration, “get tested around the holidays. That seems to be when we have challenges,” Frontier Airlines CEO Barry Biffle said a few days ago. “The FAA is adding another 10% to the workforce, hopefully that will be enough.”

Transportation Secretary Pete Buttigieg has disputed such claims, saying the vast majority of delays and cancellations are caused by the airlines themselves.

TSA expects airports to be busier than last year and likely about the same as 2019. The busiest day in TSA history came on the Sunday after Thanksgiving in 2019, when nearly 2.9 million people were screened at airport checkpoints.

People getting behind the wheel or boarding a plane seem unimpressed by higher gas and airfare prices than last year or widespread concern about inflation and the economy. That is already leading to predictions of strong travel during Christmas and New Year.

“This pent-up demand for travel is still there. It doesn’t feel like it’s going away,” said Tom Hall, a vice president and longtime writer for travel guide publisher Lonely Planet. “That keeps planes full, that keeps prices high.”

The Associated Press contributed to this report.